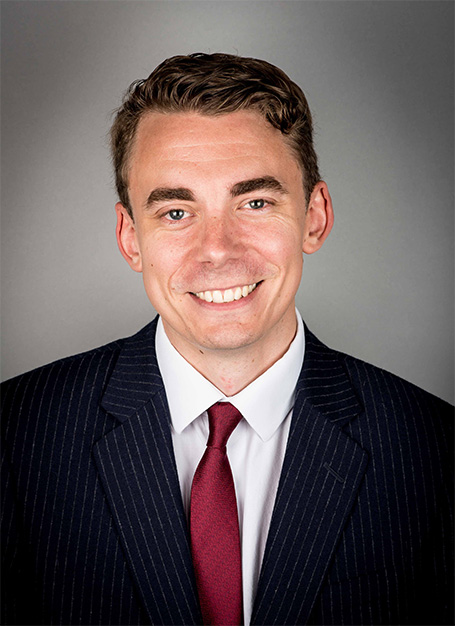 Sam accepts instructions in family law, criminal law, prison law and general civil law. He is an accredited civil and commercial mediator. He has appeared frequently on national radio as an expert legal commentator.

Prior to practising as a barrister he worked as a county court advocate on the Western Circuit and Welsh Circuit. He also worked for several years as a caseworker and tribunal advocate specialising in social security law at both a leading social welfare solicitors firm and a Citizens Advice Bureau.

“Sam Elliott is an excellent advocate; he is the best junior barrister I’ve seen for some time and is more than capable of holding his own with more senior opponents. He has a particular skill for private children law matters. He is always thoroughly prepared, has a great attention to detail and ensures clients are at ease when dealing with difficult issues”.

‘Having instructed Sam on a number of highly contested matters involving significant allegations of domestic abuse, parental conflict and fact-finding hearings, I am confident in recommending his advice and skills in representation to my clients. He deals with difficult matters practically and with a thorough understanding of the law including the more technical provisions of the FPR. His approach to client care is down to earth, sensitive and clear’.

“I started instructing Sam after being against him at court. He is a great advocate with a clear and persuasive command of the courtroom. He has an ability to understand both the client and how best to present their case. Clients like that he is both approachable but authoritative when required. Sam is strong in cross examination and has an eye for detail which means that he is always well prepared”.

“Sam constantly goes above and beyond for his clients. He is always meticulously prepared and consistently achieves great results in court”.

“Sam is a persuasive advocate; he is calm under pressure and quick thinking on his feet. He is brilliant with vulnerable clients”.

“I can highly recommend instructing Sam Elliott. He has always provided an excellent service in representing clients due for parole. The feedback from clients has always been positive including good clear communication, understanding and good quality advice and representation”.

“I couldn’t have asked for a better barrister. Sam was highly professional and dedicated to my case throughout the whole trial, and wasn’t afraid to go in strong on witnesses when it was needed. He’d clearly studied every aspect of the case, despite only having been instructed at short notice, and he knew exactly how to approach it to get the result we wanted. If I ever need a barrister again he will definitely be the first person I go to”.

“I have nothing but praise for Sam so thank you very much for the recommendation/appointment. Extremely professional throughout, adapting to an evolving situation and giving me sage advice. I’m absolutely delighted with the result in court, it was the absolute best result that could have been hoped!”

Sam primarily practises in family law with a specialism in children law (both public and private law). He is frequently instructed in matters of complexity such as cases of child abduction, applications to permanently remove the children from the jurisdiction, and cases of implacable hostility between the parents.  His background in criminal law makes him highly sought after in cases where robust cross-examination of witnesses is required, such as in fact-finding hearings regarding allegations of domestic abuse.

He  is also highly experienced in dealing with applications for Non-Molestation Orders and Occupation Orders, on behalf of both applicants and respondents.

Examples of recent instructions include:

Sam is a committed criminal defence practitioner. He is frequently instructed in cases involving vulnerable clients. He has delivered guest lectures to undergraduates about the criminal justice system.

His notable cases include:

R v UP – Inner London Crown Court – Trial for possession of a bladed article. The defendant was stopped by police in a known drug dealing area in possession of a disguised ‘credit card knife’. Defence of reasonable excuse. Not Guilty verdict.

R v SD – Isleworth Crown Court – Trial for possession of cannabis and common assault against a police officer. The alleged offences were witnessed by 5 police officers and the Defendant’s previous convictions for similar offences were before the jury. Not Guilty verdict on both counts.

R v TM – Snaresbrook Crown Court – Instructed as trial counsel on a multi-handed possession with intent to supply Class A drugs case. Successfully made representations to the Crown that there was not sufficient evidence against the defendant to pursue a prosecution and the prosecution was duly dropped.

R v DG – Luton Crown Court – Possession of firearms Newton hearing. Defendant was found in possession of over 80 bullets, including “cop-killer” bullets. Sentenced to 27 months custody after the previous judge had indicated that he expected the defendant to receive at least 5 years custody.

R v NM & others – Croydon Magistrates’ Court – Represented two co-defendants brothers charged with assaulting police officers after they refused to exit their vehicle at the request of the police. Not Guilty verdicts for both defendants.

R v N – Willesden Youth Court – Trial for possession of a knife in the context of an ongoing affray. Not Guilty verdict.

R v YA – Willesden Magistrates Court – Trial for 2 charges of assaulting a police constable in the defendant’s home. The police had been called to the property by the defendant’s mother alleging that the defendant was threatening violence against her. Not Guilty verdict.

R v AM – Wimbledon Magistrates’ Court – Successful s78 application on day of trial resulting in no evidence being offered on charges of ABH and criminal damage.

R v SI – Romford Magistrates’ Court – Assault by beating allegation made against defendant landlord by his tenant. Not Guilty verdict.

R v JP – Wimbledon Magistrates’ Court – 2 charges of s4 public order offences where the defendant had a previous conviction against the same complainant for the same offence. Not Guilty verdict on both charges.

R v JH – Feltham Magistrates’ Court – Suspended sentence obtained for possession of a knife where the Defendant had recently served 6 years imprisonment for a gang-related s18 wounding with a knife and ABH.

Sam is regularly instructed to represent prisoners at oral hearings before the parole board. Sam has a reputation for achieving impressive results for his prison clients, such as securing the release of prisoners serving life sentences for, but not limited to, murder, rape and armed robbery.

Prior to commencing pupillage, Sam appeared as an advocate in hundreds of County Court hearings. Sam has been instructed in fast-track trials; small claims trials; commercial and residential landlord disputes; mortgage possession hearings; applications to set aside default judgment; applications for summary judgment and enforcement hearings.